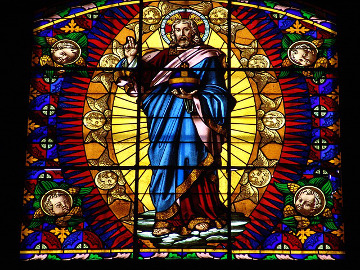 The Lord God Almighty, Maker of all Creation, so desired His creation to know Him that He sent His Son, Jesus, to be His exact Representation and our Atonement. For many of us who grew up in the church, Jesus is as familiar as any person on the street, and we treat Him just as casually. In our finite minds, it is difficult to reconcile a brother and friend with Pure Holiness.

Isaiah describes a sight to which few of us are privy until we are permanently in Heaven: (Is 6:1-4)
1 In the year that King Uzziah died, I saw the Lord, high and exalted, seated on a throne; and the train of his robe filled the temple. 2 Above him were seraphim, each with six wings: With two wings they covered their faces, with two they covered their feet, and with two they were flying. 3 And they were calling to one another:
“Holy, holy, holy is the LORD Almighty; the whole earth is full of his glory.”
4 At the sound of their voices the doorposts and thresholds shook and the temple was filled with smoke.

When anything is repeated in scripture three times, we understand it is written in the most superlative form possible for human expression. If the words of the seraphs alone are not enough, we should observe their posture. Seraphim are among the most holy of heavenly beings, as they are always in the very Presence of God. Yet, God is so holy, they had to cover their faces and feet: their faces because of God’s indescribable, radiating glory, and their feet – though not dirty from work – were still too common because of their function to be seen (note they were flying, not walking or standing – they weren’t even using their feet). Their voices – the noise that came from their vocal chords – were more powerful than the loudest crash of thunder that has ever caused us to jump and tremble in its vibration – their voices were like the shaking of an 8.9 earthquake upon something as unmovable as God’s heavenly temple. It is no wonder Isaiah was undone in the midst of this.

Do we really get this?? If we did, we would NEVER use God’s name casually in expressions like “OMG”, and certainly NEVER profanely. If we did, we could NEVER excuse our behavior and treatment of others, even when they hurt and malign us. If we did, we couldn’t judge others’ actions and words, and absolve ourselves in the process. In the Presence of such Holiness, our blame can’t be cast aside or projected elsewhere. We are exposed, even as Isaiah was, and apart from God’s grace to make us clean enough to withstand His Holiness, we could not even survive. We don’t get it.

We don’t understand how great was Jesus’ condescension to leave Glory and become human, to teach us WHO the Father really is, and to save us from ourselves by taking the punishment due our behavior. We don’t understand the extraordinary price Jesus paid for us, that belonging to Him, we are the most incredibly valuable people imaginable — literally snatched from the fire and so thoroughly cleaned that no fire damage can be found. If we truly understood any of this, the ridiculousness of defending ourselves under any circumstance would be obvious. Our hearts would be so overwhelmed with gratefulness in His Presence that all we could manage to utter – if we could speak at all — in response to His call would be, “Here am I. Send me!”

Posted in God's Character and tagged truth
← So, How DO We Pray?Great Strength →