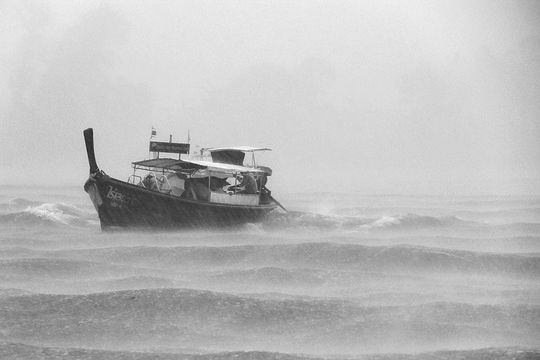 Most of us are familiar with the gospel accounts of Jesus being asleep in the bottom of the boat when a fierce storm threatened to capsize the boat and drown all its occupants. Jesus had just experienced a non-stop day of teaching, healing people and casting out demons – activities that stretched into the evening. Seeing the crowd around Him, He gave orders to His disciples to cross to the other side of the lake. Even then, He got detained by a couple people who wanted to go with Him. It was no wonder He fell into a deep sleep when they pushed off shore.

The disciples were very familiar with sudden and violent storms on this sea, and that people had, in fact, lost their lives. Why did this storm have to happen now, after the day they had had?? The ear-splitting sound of cracking wood under the weight of crashing waves could barely be heard above the roar of the wind; and maintaining their footing under the deluge of water was almost impossible. This was one of the worst storms they had ever seen!

Fear is a consuming thing that can incapacitate us from action and reason. We become desperate for someone to fix a situation that fear tells us cannot be fixed. I personally believe this is why the disciples had to wake Jesus – it was part of the frenzy. Their utter surprise and amazement at the immediate calm when Jesus spoke to the wind and waves, demonstrates they had no real expectations, and further, did not understand who Jesus really was.

Although they had witnessed and participated in healings, deliverances, and teaching that confounded the wisest minds of the day, those illustrations of God’s power were not enough to overcome the fear of dire circumstances. They did not grasp that the Word Jesus spoke about going to the other side was the same that healed a centurion’s servant when Jesus was not physically present. They had no concept that the Creator of all that is, could speak to His Creation and have it immediately obey Him. They did not know they were in the boat with God, Who had already spoken into being the completion of the journey.

In many respects we are just like the disciples: confident in low-risk situations, but faithless in storms — the loss of a job that threatens financial ruin, catastrophic illness, a (natural) disaster that has destroyed all we own, or an injustice that ruins our reputation. The disciples thought they were going to die. What loving God would permit these things to happen?

But God says, “For My thoughts are not your thoughts, neither are your ways My ways.” (Isaiah 55:8-9) If, as loving parents, we know our children cannot grasp the concept of a hot stove without touching it, does it not follow that our Heavenly Father would give us life-lessons in the most gentle way possible, while allowing the experience to be graphic enough to register? So, storms become teachable moments where we are not abandoned, but our Heavenly Father climbs into the boat with us. His Presence becomes our assurance of reaching the other side, and changes the atmosphere of fear. “There is no fear in love. Perfect love drives out all fear…” (1 John 4:18) Perhaps the greatest lesson in the storm is that nothing “will be able to separate us from the love of God that is in Christ Jesus our Lord.” (Romans 8:38-39)

Posted in Finding Hope and tagged faith, love
← The Heart-Cry of GodMy God, My Shepherd →