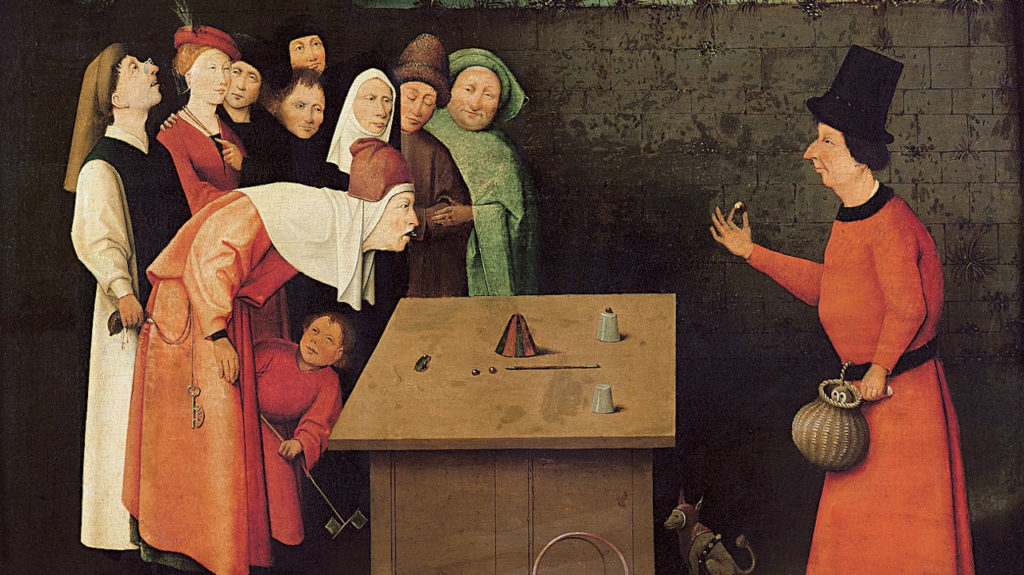 The cup game has been around for a long time.  The objective is to follow the cup with the bean seed underneath as it is mixed and shuffled with two other empty cups.  While it sounds like a simple thing to track, most of us get it wrong when the shuffling stops and we have to choose the correct cup with the bean.

God did the same thing with the genealogical line from which Jesus was descended.  Jesus was a Jew, descended from the line of Judah, one of the 12 sons of Israel.  Because Jesus was both the Son of Man and the Son of God, one might believe his human family line was of the most pure stock.  Yet, Judah had two sons die because they were evil, and his third son, Perez, was the product of incest between Judah and his daughter-in-law. Nevertheless, at his father’s death-bed, Judah received an amazing prophetic blessing of the Messiah coming through his family.  Fast-forward to the exodus of the Israelite nation from Egyptian slavery: Moses did not descend from Judah, but from his brother, Levi.  Then it was Joshua, descended from Ephraim (son of Joseph, one of the original 12) who actually led the Israelites into the Promised Land.  After Joshua came years of Judges from various tribes other than Judah.  Eventually, the people rejected having Judges, demanding a King instead.  The first King of Israel was Saul, of the tribe of Benjamin, who turned out to be a colossal disappointment.  Finally, God looked at the descendants of Judah, and chose David, the youngest and most unlikely of the sons of Jesse.

David earned the unique distinction of being “a man after God’s own heart.”  Because of his faithfulness, God promised that David would never cease to have a descendant sitting on the throne.  God chose David’s son, Solomon, to succeed him, and blessed Solomon with greater wisdom and riches than the world had ever seen.  Unfortunately, Solomon’s 600 wives (mostly pagan) led him astray, resulting in the division of Israel into two kingdoms.  Yet, the Kingdom of Judah continued to be ruled by David’s family, according to God’s promise.  But the spiritual and moral debauchery of both Kingdoms led to their overthrow by ruthless enemies and taken into captivity for 70 years.  When the Persian king, Cyrus, granted the Israelite remnant permission to return to their homeland, it was Zerubbabel who led them.  While he was descended from David, it was not through Solomon, but his brother, Nathan.  Jesus’s human father, Joseph, also came through the line of Nathan some 400 spiritually-silent years later.

Throughout this history, God never did the expected thing or chose the likely person.  He kept mixing it up, requiring faithful recorders among the Israelites to capture family genealogies in an effort to track the promised Messiah’s coming.  Oddly, these meticulous records proving Jesus’ lineage were not evidence enough for most of the Jews who, instead, chose the empty cup.  Their loss made it possible for those of us non-Jews to choose the cup with the bean – Jesus.  Additionally, His colorful human family history gives us hope that regardless of status, nature of dysfunction, or however obscure we may be, God uses the improbable and does the unlikely.  So, if you are the reject, the black sheep, the different child, used and abused, or simply a “nobody”, chances are very good that God has big plans for you. Are you available?

Posted in God's Character and tagged love
← What is Truth?Giving Credit Where It Is Due →