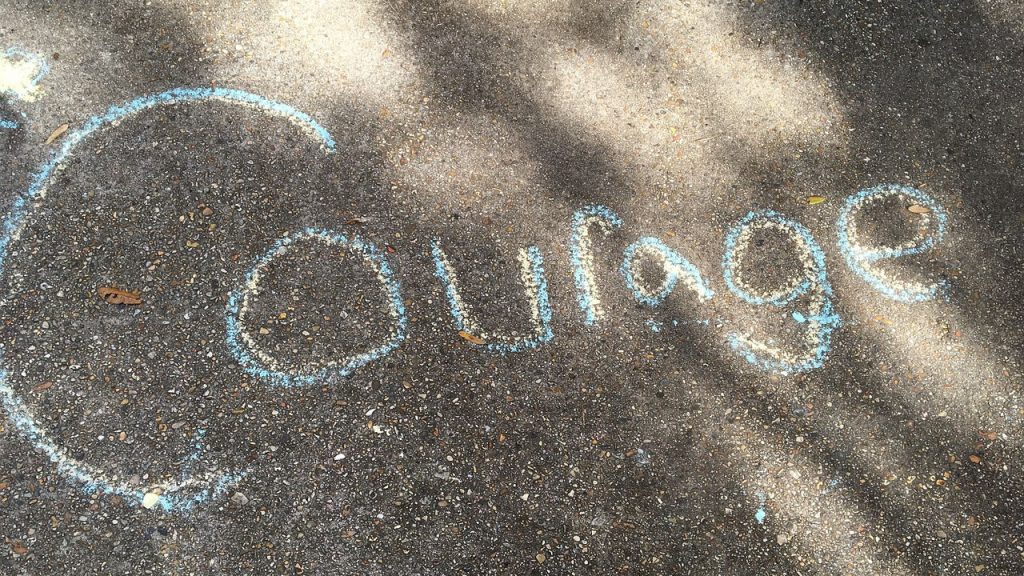 The admonishment to be men of courage was something of a battle cry throughout Israelite history. The first time we hear it is when Moses is passing the leadership baton to Joshua and tells him three times to be strong and courageous. The text of the third time really explains it: “Be strong and courageous. Do not be terrified; do not be discouraged, for the Lord your God will be with you wherever you go.” (Joshua 1:9) Joshua, in turn, admonishes the Israelites similarly for the battle of Jericho, and in the conquests to occupy the Promised Land. Israelite kings who came much later, but also followed the Lord, invoked the same words.

Paul knew this rich history when he included these words in their condensed form in his list of parting instructions. From his own experience of being imprisoned, whipped, and stoned, Paul knew the trials, perils and battles early Christians would face. His words, anointed by God, are timeless – as pertinent for us today, as then.

Merriam-Webster defines courage as the mental or moral strength to venture, persevere, and withstand danger, fear, or difficulty. The English and Oxford dictionaries simply state that courage is the ability to do something that frightens one. All of that means that courage has to be bigger than we are, and that it is not gender specific. The battle at home for a mother of multiple preschoolers can be just as daunting as the battle to save lives in the ER. (Mothers deal with every crisis imaginable, from the ingestion of poisons to running out of Cheerios.)

So, in the face of overwhelming circumstances, how do we appropriate a courage bigger than we are? The answer is the same as in Moses’ day: “… for the Lord your God will be with you wherever you go.” He is the One Who is bigger than we are, and courage resides in Him. If we are Jesus-followers, then His own words give us assurance: “On that day you will realize that I am in my Father, and you are in me, and I am in you.” (John 14:20) To the degree we don’t experience being IN Him, we are either trying to live life as the captains of our own ships, or we simply don’t believe what Jesus said. He never forces Himself on us in either regard.

To trust that Jesus’ words are true — that He will do what He promised — requires faith. Just in case exercising faith seems too difficult, it is good to remember that we all have faith in certain things … like the earth continuing to turn on its axis to produce day and night. It should not be a stretch to put our faith in the One Who created the Earth, set it all in motion, and continues to maintain it without our help.

The faith to trust God is the anti-fear. Yet, fear can also unfortunately erode trust. When the latter happens, it is generally because we have tried putting our faith in faith (which is idolatry), or putting faith in ourselves (which is pride and self-sufficiency), instead of putting faith in the reality and Presence of God, Who desires to be very active in our lives in the present moment. Every time the Israelites made their proclamation of being strong and courageous, instead of being afraid or discouraged, the Lord gave them victory in the battle. The fact is, the more we are aware of our shortcomings, inadequacies, and weaknesses, the more powerfully we can be en-couraged by God to do or withstand what would otherwise be impossible for us.

If we are to be people of courage, it follows that our trust must be in Christ alone. But, it comes down to making that choice. Will I allow the fear of my circumstances squash my faith, or will I choose to keep my eyes on Christ, even in the fear of the moment? The appropriation of God’s courage is a decision for the latter, rather than muscling through the hardship/crisis. Could it be that the most courageous thing we could ever do is to trust God in our most fearful moments, instead of taking matters into our own hands?