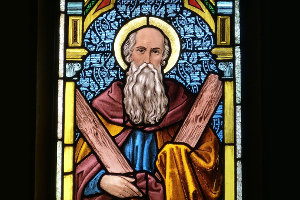 At Mt. Horeb, God made a covenant with the Israelites that they would be His people and He would be their God. The sign of the Covenant was the Law, the 10 Commandments, that He gave to Moses. Hundreds of years later, Jesus summed up these 10 rules with two: love God, and love others. It is interesting that most people see them as a list of dos and don’ts, rather than God saying, “Do this – I want the best for you. Don’t do that – I don’t want you to hurt yourselves.” In addition to what God was communicating through the Commandments, He gave a huge lesson through the method in which Moses obtained them.

God called Moses to meet Him on the top of the mountain to receive the written law that God had earlier proclaimed in the hearing of all the people. So, Moses obediently began the strenuous uphill climb. Somewhere close to the top, the path became obliterated by the thick smoke of God’s Presence. Unable to see, Moses had to trust God for the next footstep, so that a misstep did not result in a fatal fall off the mountain. At some point, he passed through the smoke into the glory of God’s Presence…so all-consuming that he was there 40 days and 40 nights without food or water. God gave him many specific instructions that culminated with presenting Moses with two stone tablets that God personally carved out and wrote upon – the 10 Commandments. What a sacred and amazing gift Moses carried down the mountain!

But that “high” was displaced with anger when Moses found the people worshiping an idol they had made in his absence. In his anger, Moses threw down and smashed to pieces God’s handwritten Covenant.   Just as the people had broken God’s Covenant with their idol worship, now the sacred tablets were broken into pieces that could not be put back together. What Moses did next was predictive of what Jesus did most profoundly hundreds of years later: he stood in the gap between God and the people to make atonement for them.

The people had rejected God’s best. They had chosen a statue they created over God’s Presence, and had chosen to go their own way, rather than to obey His law. It was a mind-blowing demonstration of God’s grace that He not only spared them, but He gave them a second chance. Only now, everything became harder. Moses had to carve out the tablets himself, then lug them back up the steep mountain. At the top, he went without food and water for another 40 days and nights. The first time, God’s glory sustained him. This time, the sin of the people drained him. At God’s direction, Moses carved the words of the commandments onto the tablets – a difficult job, as all who have tried stone-carving will attest.

This same scenario plays out with us, thousands of years later, where we are blessed to have the love of God manifested in Jesus’ death for our sin, and in His resurrection for eternal and abundant life. So, we are offered a choice in the way we live: the easy way, or the hard way – God in charge, or us in charge. Unfortunately, our way always results in pain to ourselves and others. We don’t understand that not forgiving someone for an offense against us, does not punish the offender – he/she goes on with life – but it keeps us in the prison of hurt, bitterness, and anger. We don’t understand that loving someone who has been unloving to us is the shortest distance to him/her recognizing the wrong. And we don’t understand that when everything seems to go wrong in our lives, God has something important to teach us about ourselves. Instead, we find someone else to blame.

But God loves us too much to give up on us. If we miss the lesson the first time, He will give it to us again. If we miss it the second time, He will give it to us a third, and so on. The problem is, the lesson gets harder each time it comes around. That is our doing, not His. God, like any loving parent, knows we learn better when we want to learn, so He doesn’t force the lesson. Unfortunately, pain is an effective motivator – it’s just not God’s best. I’ve spent many years learning the hard way. After numerous scars of my own making, I now want to take hold of the lesson the first time it comes. I thank God that His love still gives me the choice.